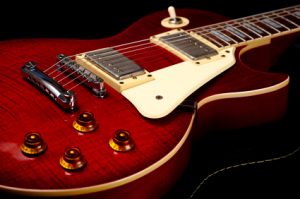 Must be something in the water lately… I’ve been getting a LOT of emails about choosing a first electric guitar. So many such that I thought it time I give you some tips here.

Tip #1: Decide On Your Budget First

There are a variety of guitars in a variety of price ranges. Set your budget first and don’t go over it unless a particular guitar compels you to do so (more on that later…)

Also keep in mind that once guitars hit about the $1500 and up range, you tend to be splitting hairs. There isn’t really a “better” or “worse” at that point, they are just different.

The more guitars you can try, the better you’ll learn what you like.

Some guitars have humbucking pickups and some have single coil pickups. Listen to the sound of guitars with both and decide which sound you prefer. 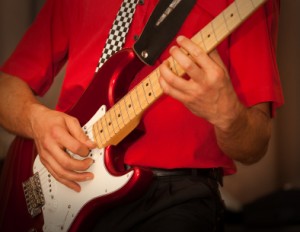 That can, however, be mitigated with a change in string gauge, so this is not an exact science. Also, some Fenders (Jaguars and Mustangs  I believe) have an even shorter scale still, like 24 inches. PRS guitars are often somewhere in the middle between “short scale” and “long scale.” So options abound.

Neck widths also vary widely, as does the radius of the fretboard (how curved it is.) All of these things go into a guitar’s general feel. So if you can pinpoint the things you want, it’s much easier to find a guitar that suits you.

Tip #3: Don’t Worry About Quality (Much)

10-15 years ago, purchasing a guitar that was made overseas in China, Vietnam, or Indonesia was a 50/50 proposition. About half the guitars I saw from those places wouldn’t have made good firewood, let alone guitars that played well.

Today, that’s changed a LOT and I’m really surprised by many overseas guitars. Especially in the $400-$800 range, but even in the $200-$400 range. So if you can’t take home the guitar in your hands (see Tip #4 below) you can at least be comfortable that it should be fine and won’t fall apart in less than a year (I’ve seen it happen.)

With all that said, if you are playing a guitar from a brand you’ve never heard of, be wary. Check the major music retail sites and see if that brand can be found at any of them. If not, it’s a smaller brand and you may want to move along.

Tip #4: Take Home The Guitar In Your Hands

No two guitars are the same, no matter what they say. You can take 2 Squier Strats off a wall, in the same color, with nearly identical serial numbers, and they won’t be 100% identical.

So when you play a bunch of guitars and you find one that “speaks” to you, take that one home. It’s common for a salesman to say, “Let me grab you a new one in a box from the back,” but tell them you want the guitar in your hands. They can put the one from the box on the floor to replace the one you’re taking.

If the salesman insists on you taking the one from the back, make sure you play it first and you are comfortable with what you’re taking home before you pay your money.

In the event that you HAVE to order the guitar and cannot try it first, make sure to order from a reputable place that accepts returns and be prepared to send the first one back. I’ve had good luck with Sweetwater, Wildwood Guitars, and Musician’s Friend. All will take a guitar back if it doesn’t work out (but always double check that first.)

This isn’t so much of a deal with the high end guitars, as there isn’t going to be one in the back in a box.

Tip #5: Get It Setup Right Away

Yes, it’s an extra expense, but in my experience as soon as your new guitar gets home and gets a few hours of playing time, it’ll need some attention. Guitars are wood and flexible, they adapt and settle in their environment. 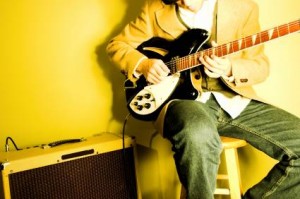 I have been known on more than one occasion to not even take a new guitar home, but instead take it straight to my repairman for a good setup. You certainly don’t have to do that, but I encourage you to have it looked at by a professional in a couple of months or maybe even less. Don’t have the strings lowered too far, they should be comfortable to play, but if you are a beginner you aren’t going to be subtle and you don’t want unnecessary buzzing from hitting things hard.

Got any more tips for buying your first electric? Share them below and maybe you’ll help some fellow newbie out…